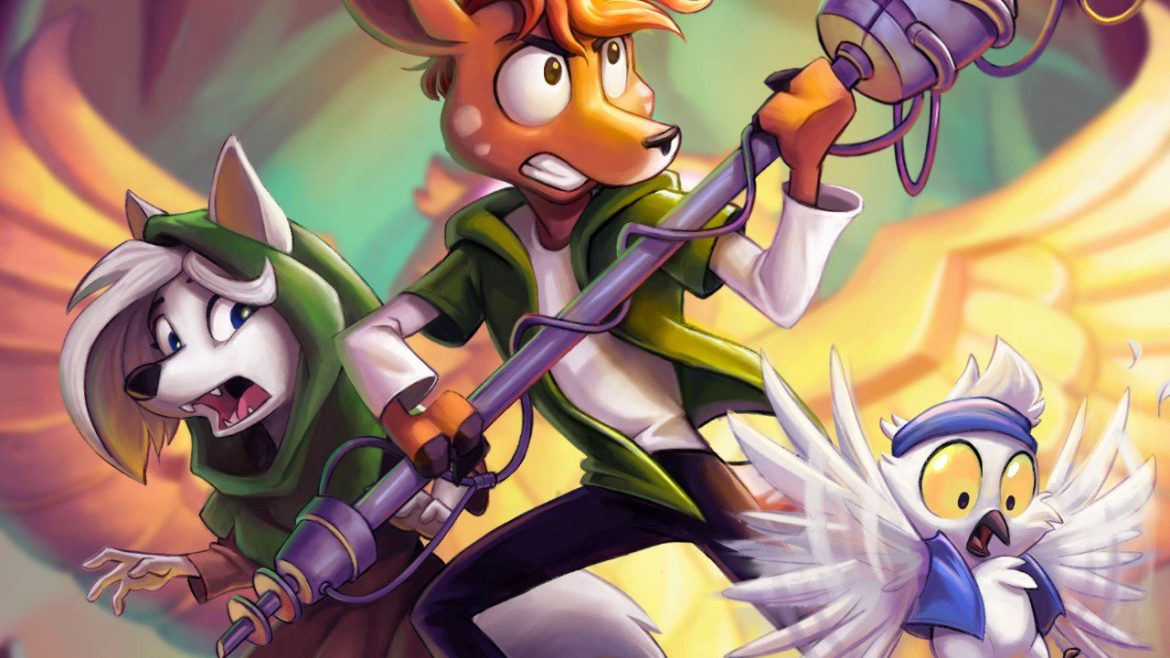 All is not well in Velehill. What was once a peaceful world, seems to be now filled with problems. First, the wolves are coming out of their kingdom to attack poor innocent animals, but now even strange machines are attacking the population and destroying houses. What is going on? Find out in our Beyond The Edge of Owlsgard review.

Beyond the Edge of Owlsgard review – ending 2022 with a bang

It is fair to say that 2022 was filled with many great point and clicks. Even beyond the return of classic series from the 90s, indie devs have produced many solid titles. Beyond the Edge of Owlsgard has some competition to stand up to, and it comes a successful Kickstarter. The German one-man studio WatchDaToast developed the game, while also having the budget for professional voice acting.

The protagonist, Finn, a roebuck looking for his family, mysteriously disappeared after an attack on their house. Along with him there will be Gwen, an owl and a gym rat, who will join in the quest a bit later. At the start, the player gets to choose between “modern” and “classic” styles, which translates into less pixel hunting. Overall, I would recommend going for the modern style, since there’s no hint system built in anyway. Modern style makes things a little bit easier, along with warning the player before possible death moments with a big “save!” icon. Deaths are in classic Sierra style and, while I was sorry to see Finn bite the big one, it sure made for some entertaining ends.

While at first glance, Beyond the Edge of Owlsgard might pass for another “pixel art” adventure game, looking a little bit further there was a lot of work on its graphics. The art was handmade with many delightful custom animations for the animal characters of the game which can be definitely appreciated, along with quite lush backgrounds to look at. The music is also clearly in touch with the classic early 90s experiences, but – luckily – WatchDaToast’s game goes for atmosphere, rather than pointless nostalgic references. The voice acting is definitely solid overall, especially for the protagonists Finn and the owl Gwen.

The spirit of Beyond The Edge of Owlsgard is definitely closer to adventures which made exploration their biggest selling point, like The Legend of Kyrandia and King’s Quest, plus a classic SCUMM interface. While the puzzles are, for the most part, of the logical kind, they do not seem to be the fulcrum of the adventure. Examining every nook and cranny is the way to go about solving most of the riddles we will be presented with since even new locations will be unlocked just by reading a poster. There will be no help to find hotspots in every scene, so a good esploration with the mouse pointer is always recommended.

The story is about uncovering the nature of the threats that are jeopardazing the world of Velehill, but – while trying to avoid spoilering the plot – there were a couple of issues with the world-building that start to be noticeable the more one goes deep into the mysteries of how the place was created. Owlsgard is a “young” world, sure, but apparently, most of its inhabitants seem not to be really bothered with questioning its mysterious nature and go “oh well, that’s how it is”.

Progressing through Beyond The Edge of Owlsgard is mostly natural, even though the game does like to throw red herrings at the player every once in a while. For example, at one point you’ll pick up a door stop and there is a puzzle that hints at you having to keep the door open to make the wind flow inside. But, in the end, that is not the puzzle at all and the door stop will not be used with any doors at all. Classic adventure game logic, for sure!

Beyond the Edge of Owlsgard is yet another refulgent example of a genre that seems to be tailor-made for telling long and rich stories, but also doesn’t necessarily have to be nostalgia-driven to appeal. With well-made pixel art animations and backgrounds, plus solid voice acting and music, this will definitely please fans of the genre and also leave any potential newcomer quite satisfied.

We use cookies on our website to give you the most relevant experience by remembering your preferences and repeat visits. By clicking “Accept All”, you consent to the use of ALL the cookies. However, you may visit "Cookie Settings" to provide a controlled consent.
Cookie SettingsAccept All
Manage consent

This website uses cookies to improve your experience while you navigate through the website. Out of these, the cookies that are categorized as necessary are stored on your browser as they are essential for the working of basic functionalities of the website. We also use third-party cookies that help us analyze and understand how you use this website. These cookies will be stored in your browser only with your consent. You also have the option to opt-out of these cookies. But opting out of some of these cookies may affect your browsing experience.
Necessary Always Enabled
Necessary cookies are absolutely essential for the website to function properly. These cookies ensure basic functionalities and security features of the website, anonymously.
Functional
Functional cookies help to perform certain functionalities like sharing the content of the website on social media platforms, collect feedbacks, and other third-party features.
Performance
Performance cookies are used to understand and analyze the key performance indexes of the website which helps in delivering a better user experience for the visitors.
Analytics
Analytical cookies are used to understand how visitors interact with the website. These cookies help provide information on metrics the number of visitors, bounce rate, traffic source, etc.
Advertisement
Advertisement cookies are used to provide visitors with relevant ads and marketing campaigns. These cookies track visitors across websites and collect information to provide customized ads.
Others
Other uncategorized cookies are those that are being analyzed and have not been classified into a category as yet.
SAVE & ACCEPT